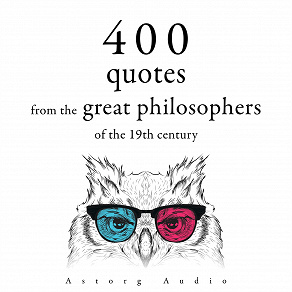 400 Quotations from the Great Philosophers of the 19th Century

by Ralph Waldo Emerson ‚ Friedrich Nietzsche ‚ Søren Kierkegaard ‚ Arthur Schopenhauer
While we tend to think of the great thinkers as hailing from Ancient Greece, the 19th century has had more than its fair share of sharp minds.

‘400 Quotations from the Great Philosophers of the 19th Century’ is a collection of reflections, insights, and observations from some of the best brains of that era.

A superb book for dipping in and out of, this makes a great gift for anyone with an interest in history or philosophy.

Søren Kierkegaard (1813 – 1855) was born in Copenhagen. He is considered to be one of the founders of existential philosophy and wrote many books on religion, ethics, morality, and philosophy. Born in Poland, Arthur Schopenhauer (1788 – 1860) was one of the first philosophers to combine elements of Indian philosophy and Western philosophy, in his pursuit of transcendental idealism.

Friedrich Nietzsche (1844 – 1900) is regarded as one of the 19th-century philosophers to have had a lasting effect on contemporary philosophy. Born in Germany, he wrote 14 books on subjects such as cultural criticism, and poetry. Ralph Waldo Emerson (1803 – 1882) was an American philosopher, and poet, who led the American transcendentalist movement during the 1800s.
Listen to sample
Log in to borrow