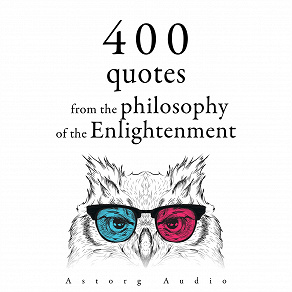 400 Quotations from the Philosophy of the Enlightenment

by Jean-Jacques Rousseau ‚ Denis Diderot ‚ Voltaire ‚ Montesquieu
Known as the ‘Age of Enlightenment,’ the 1700s were a time that provoked significant leaps in philosophical thought.

Most importantly, the thinkers of the time espoused the virtues of happiness, the evidence provided by the senses, and the distance between organised religion and the state.

‘400 Quotations from the Philosophy of the Enlightenment’ offers a fascinating insight into the philosophical revolution that was taking place during the 18th century.

It is ideal for those needing an extra bit of motivation throughout their day.

Montesquieu (1689 – 1755) was born in Aquitaine, and his writing had a huge influence on political systems during the 18th century. Voltaire (1694 – 1778), a Parisian, was one of the founders of the French Enlightenment movement.

Born in Langres, Denis Diderot (1713 – 1784) was a writer and another important figure in the Age of Enlightenment. Born in Geneva, Jean-Jacques Rousseau (1712 – 1778) was a spearhead in the European Enlightenment movement.
Listen to sample
Log in to borrow