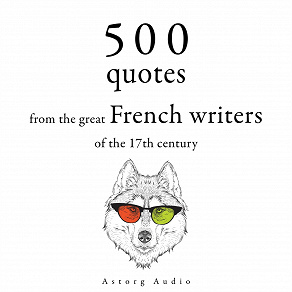 500 Quotations from the Great French Writers of the 17th Century

This was also the case for the literature of the 17th century which followed France’s pioneering status in politics and culture.

‘500 Quotations from the Great French Writers of the 17th Century’ offers a fascinating snapshot of that changing society, seen through the eyes of some of the best writers of the era.

A superb book for dipping in and out of, this makes a great gift for anyone with an interest in French literature.

One of the most popular French poets of the 17th century, Jean de la Fontaine (1621 – 1695) was a pioneer of the fabulist form of literature. Imbuing animals with human characteristics, he paved the way for other fabulists to follow. Recognised as one of the three most important playwrights of the era, Pierre Corneille (1606 – 1684) is best remembered for his tragedies. He wrote 37 plays, including ‘El Cid.’

The next of the three French greats, Jean Racine (1639 – 1699) was also a tragedian known for his use of brutal yet eloquent speech. Completing the trio is Moliere (1622 – 1673). While his peers wrote tragedies, Moliere focused on comedies and his plays have been translated into almost every language on the planet. Jean de La Bruyère (1645 – 1696) was a philosopher and satirist whose works satirised many of his contemporaries.
Listen to sample
Log in to borrow