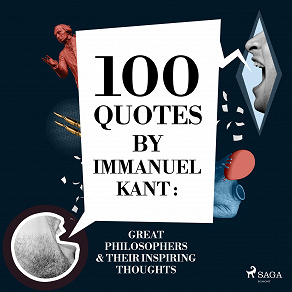 by Immanuel Kant
Packed with carefully selected musings from the likes of ‘Critique of Pure Reason,’ ‘Critique of Judgement,’ and ‘Metaphysics of Morals,’ ‘100 Quotes by Immanuel Kant: Great Philosophers & Their Inspiring Thoughts’ offers an insight into one of the greatest minds of the 18th century.

The perfect book to dip in and out of, readers will be fascinated to see just how Kant’s proposals have stood the test of time.

A fantastic read for those interested in the great philosopher’s works and anyone with a fascination for the human condition.

Born in Königsberg, Immanuel Kant (1724 – 1804) was one of Germany’s most important philosophers and a leading figure in the ‘Age of Enlightenment’ movement.

At Königsberg University, he was introduced to philosophers such as Leibniz and Wolff, before assembling his ideas for what would later become known as ‘transcendental idealism.’

After some years in self-imposed social exile, Kant published his most famous work, ‘Critique of Pure Reason.’ Arguing that some knowledge exists purely as a mental construct, irrespective of experience, he established himself as one of the most forward-thinking philosophers of his generation.
Listen to sample
Log in to borrow