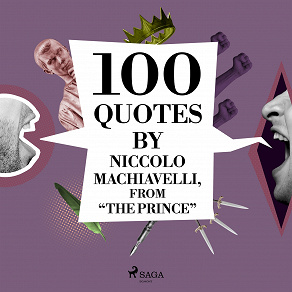 100 Quotes by Niccolo Machiavelli, from 'The Prince'

by Nicolas Machiavel
‘100 Quotes by Niccolò Machiavelli, from The Prince’ gives us an insight into the keen intelligence driving one of Italy’s most powerful political animals.

‘The Prince’ proposes the idea that, in order to survive in the political arena, its combatants must be prepared to do absolutely anything to achieve their aims.

This book has cherry-picked the most pertinent and incisive quotes from Machiavelli’s greatest work, which is still pertinent today.

An ideal book to dip in and out of, ‘100 Quotes by Niccolò Machiavelli, from The Prince’ is the ideal read for those looking to explore the musings of one of the greatest political philosophers of the Italian Renaissance.

Born in Florence, Italy, Niccolò Machiavelli (1469 -1527) was a philosopher, diplomat, author, and historian. Schooled in Latin, rhetoric, and grammar, Machiavelli found employment in the Chancery, responsible for the production of governmental documents. Shortly after, he was given the position of Secretary of the Florentine Republic.

During his lifetime, Machiavelli wrote 13 political discourses, and eight works of fiction. His most famous book, ‘The Prince,’ is an exploration of the machinations of monarchy and political survival. In it, he espouses the idea that the key to political success is the use of any means possible, scrupulous, or otherwise. This work has given rise to the term, ‘Machiavellian,’ used as a way to describe someone who is cunning and scheming.