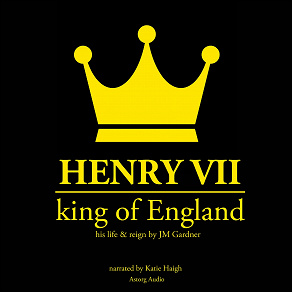 by J. M. Gardner
Henry Tudor was born in a country ravaged by conspiracies, coups, and ruthless violence. He belonged to the Plantagenet Royal Family, House of Lancaster. They were engaged in a bloody battle with the House of York, in a conflict that had been going on for years for control of the throne of England: the War of the Roses. Through ruse and guile, Henry Tudor made sure he emerged as the only claimant to the Crown. When he ascended the throne, he managed to unite the two warring houses by his marriage with Elizabeth of York, effectively ending the civil war while founding the Tudor dynasty; but to many, he remained an usurper and a false king. His story is rich with treachery, intrigue, and ruthlessness, while he was a capable monarch. Discover the dramatic story of the foundation of the Tudor Dynasty with this lively and documented history audiobook.