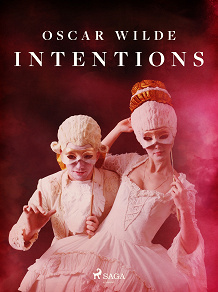 by Oscar Wilde
‘Are there not books that can make us live more in one single hour than life can make us live in a score of shameful years?’ In this brilliant collection of essays, Oscar Wilde talks about art, literature, and criticism as only he can. The topics range from discussions of Shakespeare’s use of costumes and stage design to elevate his dramas, to condemnations of realism, and celebration of criticism as an art form in itself. ‘Intentions’ is bold, insightful, and witty. Its ideas show why Wilde was considered one of the most unique voices of his time and many of the topics are still fiercely debated today, such as whether art should have a moral message or simply exist to be artistic. These essays truly show Wilde at his best and lay a clear foundation for the ideas and beliefs that would shape his later writings. ‘Intentions’ provides an unparalleled look into the mind of a great artist and should be read by any fans of Wilde or aspiring artists.

Oscar Wilde (1854-1900) was a popular Irish playwright, novelist, essayist, and poet. Some of his most celebrated and well-read works are ‘The Picture of Dorian Gray’ and ‘The Importance of Being Earnest’. Wilde’s life ended in tragedy as he was sentenced to prison due to acts of gross indecency with men and died at a young age shortly after being released. Although Wilde’s life was cut short, his influence lives on to this day and he is celebrated as one of the finest writers of his time. His work has been adapted for stage and screen many times, including an announced ‘Dorian Gray’ film directed by musician St. Vincent.