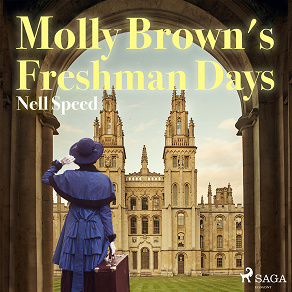 by Nell Speed
The first in the ‘Molly Brown’ series of children’s novels by American author Nell Speed, in ‘Molly Brown’s Freshman Days’ we are introduced to the loveable main character Molly as she leaves home and starts college. She has a lot to learn about college life, but she makes many new friends that will help her, as well as help to keep her homesickness at bay. Fans of Enid Blyton’s ‘Malory Towers’ and ‘St. Clare’s’ novels will also enjoy the Molly Brown series.

Nell Speed (1878-1913) was an American children’s book author from Louisville, Kentucky. She is best-known for the ‘Molly Brown’ series of books, which followed the central character of Molly Brown through her education, describing her exploits and adventures with friends. Though Nell Speed wrote the first four of the novels in the series, she was extremely ill with cancer. She persuaded her sister Emma Speed Sampson to finish the series following her premature death, which Emma dutifully did, continuing the series under her sister’s name. She went on to write an array of children’s books under her own name too.
Listen to sample
Log in to borrow