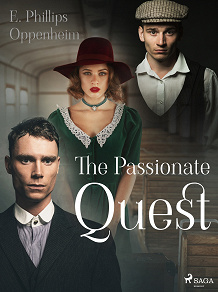 by Edward Phillips Oppenheimer
In a break from his more typical crime and thriller genres, E. Phillips Oppenheim’s ‘The Passionate Quest’ follows the lives of three siblings, each tired of their life in rural England. Rosina dreams of becoming an actress, her brother Philip longs to become a poet, and Matthew has ambitions in finance. We follow each of them as they struggle towards making their dreams reality. A sweet, short tale from the popular author.