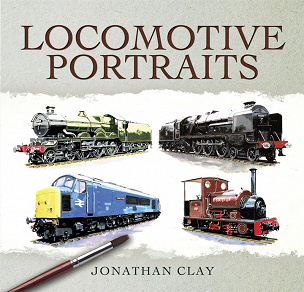 by Jonathan Clay
Railway art has existed as long as there have been Railways. Many famous names have included some aspect of railways in their paintings, notably Claude Monet and J M W Turner. This tradition has been kept alive by the formation in the UK of the Guild of Railway Artists, which now consists of over 200 artists, of which Jonathan Clay is one. Over the last few years, Jonathan has had many requests to produce his own book of pictures, and, having relented at last, this is the result.  In order to save time for his first ever railway event in 1999, he painted a series of locomotive pictures without backgrounds, intending to add the scenery later. However, they sold so well, that they became the norm, and the series of 'Locomotive Portraits' was born.
Log in to borrow