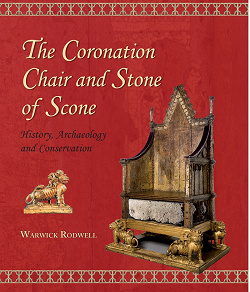 The Coronation Chair and Stone of Scone

by Warwick Rodwell
Constructed in 1297−1300 for King Edward I, the Coronation Chair ranks amongst the most remarkable and precious treasures to have survived from the Middle Ages. It incorporated in its seat a block of sandstone, which the king seized at Scone, following his victory over the Scots in 1296. For centuries, Scottish kings had been inaugurated on this symbolic ‘Stone of Scone’, to which a copious mythology had also become attached. Edward I presented the Chair, as a holy relic, to the Shrine of St Edward the Confessor in Westminster Abbey, and most English monarchs since the fourteenth century have been crowned in it, the last being HM Queen Elizabeth II, in 1953.

The Chair and the Stone have had eventful histories: in addition to physical alterations, they suffered abuse in the eighteenth century, suffragettes attached a bomb to them in 1914, they were hidden underground during the Second World War, and both were damaged by the gang that sacrilegiously broke into Westminster Abbey and stole the Stone in 1950. It was recovered and restored to the Chair, but since 1996 the Stone has been exhibited on loan in Edinburgh Castle.

Now somewhat battered through age, the Chair was once highly ornate, being embellished with gilding, painting and coloured glass. Yet, despite its profound historical significance, until now it has never been the subject of detailed archaeological recording. Moreover, the remaining fragile decoration was in need of urgent conservation, which was carried out in 2010−12, accompanied by the first holistic study of the Chair and Stone. In 2013 the Chair was redisplayed to celebrate the Diamond Jubilee of the Coronation of HM The Queen.

The latest investigations have revealed and documented the complex history of the Chair: it has been modified on several occasions, and the Stone has been reshaped and much altered since it left Scone. This volume assembles, for the first time, the complementary evidence derived from history, archaeology and conservation, and presents a factual account of the Coronation Chair and the Stone of Scone, not as separate artefacts, but as the entity that they have been for seven centuries. Their combined significance to the British Monarchy and State – and to the history and archaeology of the English and Scottish nations – is greater than the sum of their parts.

Also published here for the first time is the second Coronation Chair, made for Queen Mary II in 1689. Finally, accounts are given of the various full-size replica chairs in Britain and Canada, along with a selection of the many models in metal and ceramic which have been made during the last two centuries.