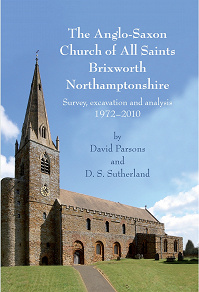 The Anglo-Saxon Church of All Saints, Brixworth, Northamptonshire

by David Parsons ‚ Diana Sutherland
All Saints’ Church, Brixworth lies 7 miles north of Northampton. The core of the church is Anglo-Saxon and the research published here provides an unprecedented account of one of the most important buildings of its period surviving in England. The building of the main body of the church was towards the end of the 8th century, with a western tower, stair turret and polygonal apse added before the end of the 9th. Major modifications were made during the early and later medieval periods.

From the early 19th century the church attracted much antiquarian interest, especially by topographical draughtsmen, whose drawings are crucial to its understanding before major restoration. Reverend Charles Frederick Watkins (Vicar, 1832–1871) made a particular study of the church fabric and identified both surviving and demolished Anglo-Saxon structures. Restoration under his direction reversed most of the medieval changes he recognised within the standing fabric, leaving the church with much the same appearance as it has today.

The Brixworth Archaeological Research Committee, founded in 1972, embarked on an in-depth archaeological and historical study of All Saints’. Limited excavation revealed evidence for the former extent of the cemetery and examined remains of the early structures to the north of the church, including one whose foundations cut a ditch containing 8th-century material. The later 8th-century date for the foundation of the church was confirmed by radiocarbon dates from charcoal extracted from construction mortar in the church fabric. A complete stone-by-stone survey of the standing fabric, accompanied by petrological identifications, has led to a refined appraisal of the construction sequence and the identification of ‘exotic’ stone types and Roman bricks reused from earlier buildings up to 40 km distant.

The archaeological, geological and laboratory findings presented here have been amplified by contextual studies placing the church against its archaeological, architectural, liturgical and historical background, with detailed comparisons with standing and excavated buildings of similar age in north Europe and Italy.