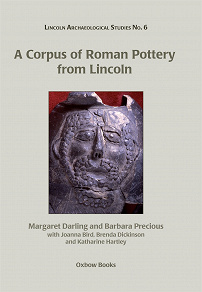 A Corpus of Roman Pottery from Lincoln

by Barbara Precious
This is the first major analysis of the Roman pottery from excavations in Lincoln (comprising more than 150,000 sherds). The pottery is presented in seven major ware groups. Fine wares include a modest range of imports and are dominated by Nene Valley products. Oxidised wares are mostly local products with a few imports as are the shell- and calcite-tempered wares and reduced wares. The final three are the standard specialised wares: mortaria, mostly of German and Mancetter-Hartshill manufacture; amphorae (80% Spanish Dressel 20) and samian, mostly from Les Martres/Lezoux and 75% undecorated! The discussion explores the chronological range of the entire ceramic assemblage across the three discrete parts of the Roman fortress and later colonia.
Log in to borrow