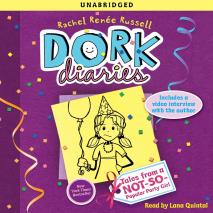 by Rachel Renée Russell
Now that Nikki is starting to adjust to life at her new school with awesome friends Chloe and Zoey at her side, things are looking up. Her crush Brandon even asks her to be his lab partner for "Structure of Mitochondria." Hello! Seriously awesome development! But after Nikki overhears mean girl Mackenzie bragging that Brandon's going to take her to the Halloween dance with an Edward and Bella couples costume planned, a bummed Nikki signs on to spend Halloween at a kids' party for her little sister Brianna instead. It's only after she makes the commitment that she finds out Mackenzie was lying and Nikki's dream of going to the party with Brandon could be a reality. Now she's got two parties to juggle, plus plenty of other trials and tribulations along the way, ranging from creating a fairy repellant spray to ease Brianna's ongoing fear of the tooth fairy to trying to stifle a nasty case of the hiccups at her dad's ex-boss's funeral. Life for Nikki Maxwell is never dull!
Listen to sample
Log in to borrow