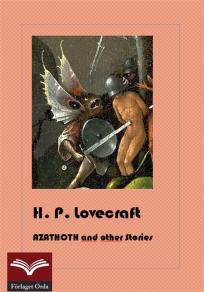 AZATHOTH and other Stories

by H. P. Lovecraft
Howard Phillips Lovecraft (August 20, 1890 – March 15, 1937) — known as H. P. Lovecraft — was an American author of horror, fantasy and science fiction, especially the subgenre known as weird fiction.
Lovecraft's guiding aesthetic and philosophical principle was what he termed "cosmicism" or "cosmic horror", the idea that life is incomprehensible to human minds and that the universe is fundamentally inimical to the interests of humankind. As such, his stories express a profound indifference to human beliefs and affairs. Lovecraft is best known for his Cthulhu Mythos story cycle and the Necronomicon, a fictional magical textbook of rites and forbidden lore.
Although Lovecraft's readership was limited during his lifetime, his reputation has grown over the decades, and he is now regarded as one of the most influential horror writers of the 20th century. According to Joyce Carol Oates, an award-winning author, Lovecraft—as with Edgar Allan Poe in the 19th century—has exerted "an incalculable influence on succeeding generations of writers of horror fiction". The popular science fiction and fantasy author Stephen King called Lovecraft "the twentieth century's greatest practitioner of the classic horror tale."King has even made it clear in his semi-autobiographical non-fiction book Danse Macabre that Lovecraft was responsible for King's own fascination with horror and the macabre, and was the single largest figure to influence his fiction writing.[6] His stories have also been adapted into plays, films and games.
Read sample (Download)
Log in to borrow